January 08, 2011
I got too overly excited in refreshing my OS installation in my old Inspiron 640m that I just cleaned off the Linux partition through the Drive Management Snap-in of Microsoft while I was still booted in XP. I completely forgot that the GRUB was the bootloader managing my OS selection in the Master Boot Record of my drive.

There is a quick fix with this by using the XP install CD and fixing the MBR by going to the command prompt and typing fixmbr more on this is discussed on this website: http://askbobrankin.com/fix_mbr.html

But unfortunately, I dont have my XP install CD with me. This would also be a problem for those people who are using a netbook and accidentally cleared their Master Boot Record.

There is a tool called SuperGRUB which could fix your GRUB boot loader (incase it just got corrupted) or if you want to just use the Windows bootloader, you could also choose to activate it instead.

You could easily create a SuperGRUB bootable USB drive by using the UNetbootin application for Windows and Linux found on this website: http://unetbootin.sourceforge.net/

When running UNetbootin, just select SuperGRUB from the dropdown 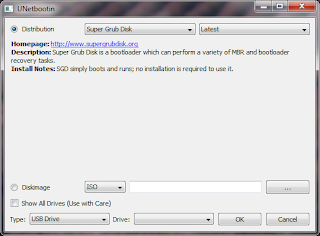 All you need to do is select your USB drive from the drop down at the bottom and it will automatically download and install SuperGRUB from the internet and create a bootable flash drive.
UNetbootin is also a handy tool in creating bootable flash drives so you could install your favorite Linux distribution on a computer without a CD drive. Same process goes, just select the distribution from the drop down and the version, but instead of having UNetbootin download it, you would select an .ISO image of your distribution of choice. Proceed to select your desired flash drive location and press ok.
Going back, upon booting SuperGRUB, just follow the instructions. Again, for someone who doesnt like reading manuals, I had to reboot several times until I forced myself to read the instructions before using it. Again, the instructions would tell you how it works and what to select. So save yourself some time and go through it before selecting anything on the menu.