March 14, 2011
For years, I have been using TorrentFlux (url here) as my primary torrent client situated in my Ubuntu download server. But as time went on, the developers completely abandoned the development of TorrentFlux which led to several forks which I think is still insufficient for my needs.

Ive checked several options which runs on a GUI-less environment. Since my Ubuntu server is just running on command line to save precious memory, I needed something bare, simple and is packed with features. 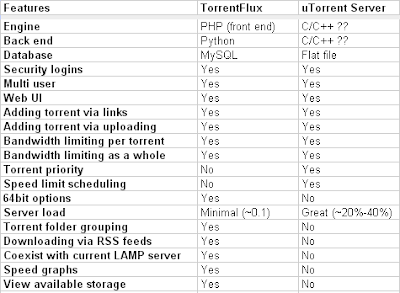 Installing uTorrent Server is pretty straight forward. Download. Uncompress. Run. This is better than the approach of TorrentFlux which you need to setup LAMP server and create a database. More often than not, it happens to me that some of the data in the DB gets corrupted. I normally just reinstall the whole thing again.

To further elaborate on the setup process, I've gotten an excerpt from this thread which, quite simply discusses how to run uTorrent Server. (http://forum.utorrent.com/viewtopic.php?id=84274)

1.) Download using WGET command. The link for the latest version is here: http://www.utorrent.com/downloads/linux

3.) Go inside the folder

6.) Open your favorite browser and point to your servers ip at port 8080

1.) It runs its own webserver - I dont need another crap running at another port. I want it to run under my existing apache setup in my existing port 80 connection. Actually, there is an option, but after working to make it work (either the uTorrent Server or the Apache configuration is acting up), I gave up on it.

2.) You have to do some funky stuff to make it run on boot - You have to create a daemon for this process to automagically run when your server suddenly dies and wakes up.

3.) The damn thing is heavy - It eats up great amounts of my CPU cycles running some torrents.

4.) The stuff I downloaded is scattered in my download folder - I often download stuff which is RARed several times. It doesnt have the option to group per torrent task which leads you to wonder which file goes with whom?

5.) Stupid configuration file - Most applications look for a specific file before it creates its own. This beast doesnt give a rats ass about that. If you dont inherently define what config to use.. It will 'virtually' create another config with the default values.

6.) The GUI is heavy like a 10 ton pregnant whale - I wanted to queue a torrent on my iPhone, the thing was staggering. I wanted to throw my iPhone in frustration. Hey, maybe theres an app for that!

Well, im still hoping that the newer fixes would take care of those things. But right now, im pretty much flinching everytime I use uTorrent Server for downloading stuff. I guess, the important thing is I get to queue stuff wherever I am and just immediately watch when I get home.