September 22, 2018
Recently I went back to streaming and tried to improve my setup and use Streamlabs OBS (SLOBS), a variant of the popular Open Broadcaster Software (OBS) which includes a really nice app for iOS and Android which lets you control you broadcast.

My only issue about SLOBS (and/or OBS) in general is when you stream some games, its a hit or miss experience. Most of the reported issues include a black screen (but with audio) or in my experience, frozen frames as I transition from one part of a game to another.

I had the time to do some trial and error testing yesterday and listed below is the pre-requisites and some quick summary of my setup. Take note of the terminologies used throughout this post.

Below is my SLOBS/OBS desktop app setup which has 4 scenes:

In my SLOBS app, I start with the Stand By scene and just toggle to the other scenes as needed. 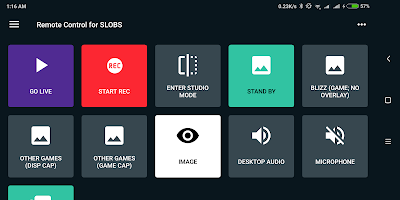 Please keep in mind that the tests performed here is not a complete and exhaustive test on what works for what games all the time. It is always better to preview your OBS using a second monitor or hope that the SLOBS mobile app would include a feature to preview your stream before hitting that "Go Live" button.

The combination of SLOBS desktop and mobile app completely removes the need for an expensive device like an Elgato Stream Deck. While it is lacking in some of the aspects like: Why cant it properly handle overlays? Why does it panic if you have too many of the same sources in too many scenes? For a free application, I'm not one to complain. I do feel that at times it is disappointing to go back to my stream and see that nothing was captured.