December 19, 2010
I landed in LA around 5 days ago, because we were ahead by a week from my sisters arrival, we were out of plans and out of things to do. My sister normally does all the planning and moving from one place to another.. During the first days, me and my dad tried to catch up all the lost sleep we had from the plane and did some minor body clock adjustments. All the time doing nothing was kinda getting depressing. Its a good thing that I got to go out today and set out traveling around a place I don't know, alone.

I did my research beforehand and I think part of a decent survival kit (normally for first world countries) is first to know your way around. Back then, we get to go around using maps, but now I think we have Google to thank for Google Maps. The only problem is, you need consistent stream of data so you wont get lost.

With my laptop, I checked out a nice place to visit that is either walkable or accessible with just one bus ride probably a kilometer or two away from my place. There was a T-Mobile branch some walking distance + a bus ride away from our place. I headed there and got myself a sim with unlimited data.

Commute money is also an important aspect i've learned from my visits from different countries. Like particularly, the buses around LA doesn't give out change. You gotta pay the exact amount. Before setting off, I asked my dad for loose quarters to make commuting easier.

After getting my sim, I felt kinda ripped of having it cost around 65 bucks (2,900) pesos for unlimited text and unlimited data. The night before I had my eyes set on the prepaid with an unlimited data pass for a day which costs 1.50$ but the local T-Mob rep rebutted me that i'd be spending a lot on data if I go with the prepaid voice sim. Either that or I was just ripped off to take in a 65 bucks data plan for one month. Either way, I think those kind of things could be charged to experience. I wouldn't have loyalty to T-Mob forever, I linked my US number to my Google Voice number so that next year when I go back, I could grab another sim and register it to my GV number.

After which, I headed to the nearby Coffee Bean and Tea Leaf for my usual dose of chai tea latte. It was 4 bucks (~170 pesos) which is not bad. My regular chai tea latte in the Philippines costs 130. Then I realized one of the cardinal rules of traveling. Do not convert.

Well, ripped off or not, sometimes you just gotta sit back and enjoy the view (despite being rainy and all) 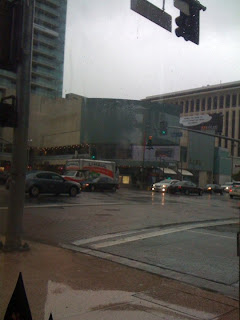